OK, this is the last of the brochures which Syd was kind enough to leave with me for scanning, and once again it’s impossible to date it accurately.  My money’s on sometime between 1935 and 1940, but whatever … 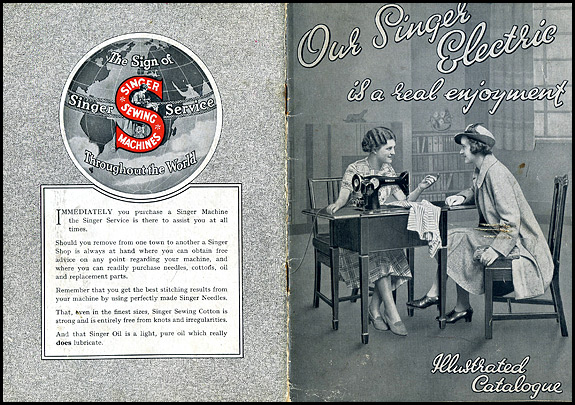 What a delight it is to imagine that anybody might really say, by way of everyday conversation, that something “is a real enjoyment”!  Be that as it may, that front cover illustration immediately reminded me of Mrs De Vries, the nosey old biddy who lived next door for much of my early childhood.   She it was whose first words upon being invited into the house for her weekly gossip would invariably be “I won’t take my coat off, I’m not stopping”, and who would still be wearing it (and her hat) an hour or more later after the usual two cups of tea and the slice of stale shop cake that Grandmother always provided for visitors.

She it was too who recklessly walked out of her front garden gate one fine summer morning long ago without checking whether four-year-old me was hurtling towards her downhill at great speed upon his tricycle.  I still blame her for my first broken arm, and have never really got over the fact that the scant sympathy I was getting from Grandmother immediately turned into a major bollocking when I explained how it was all Mrs De Vries’ fault.  But I digress.

I reckon it’s stretching it a bit to describe the D-shaped swing-out thingy on the inside of the left-hand door of a 51 Cabinet as a “commodious drawer”, but it’s certainly handy and we’re big fans of this cabinet here.  The veneer on the front of some of them is really lovely, the treadle mechanism works a treat, it’s a doddle to raise and lower the head, and it’s easy to fit castors to one so you can move it about the place, should you wish. 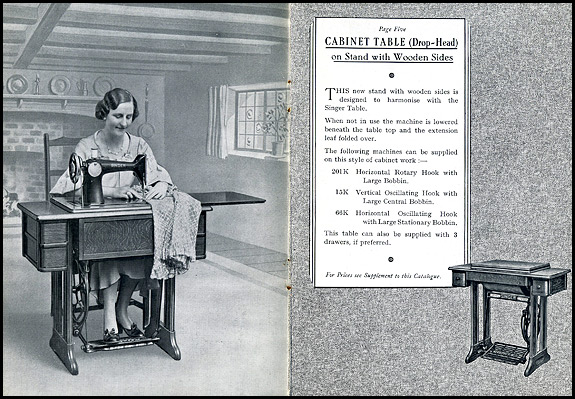 I’m still not sure when they changed over from cast iron to wooden sides on the domestic tables, but in this brochure we see the cabinet table described as a “new stand with wooden sides”.  And it’s never occurred to me before, but  I wonder why Elsie’s is the only 201 we’ve ever seen in a Cabinet Table.  And why have we never seen a 15 in a 51? 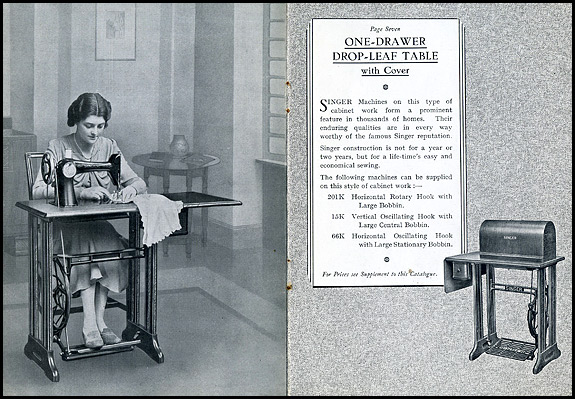 Apparently “Singer Machines on this type of cabinet work form a prominent feature in thousands of homes”.  So I wonder why they’re decidedly uncommon in England now.  Neither of us is certain that we’ve ever seen one!

I’ve never seen a fireplace that close to a wall either, but never mind.  This No.40 Table’s a bit of a rare bird nowadays too, which may well be down to its design being something of an acquired taste to 21st century housewives ( if it’s still permissible to use the term). 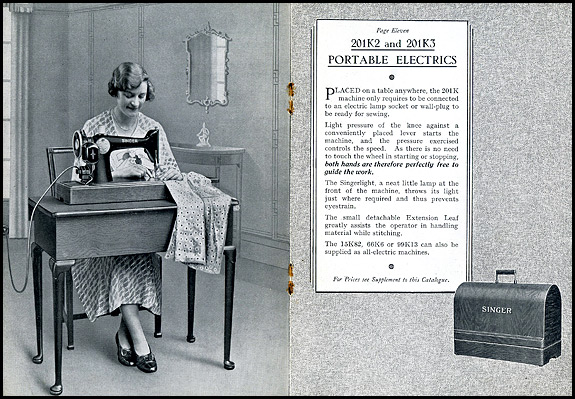 And here we have the 201K2 and 201K3 Portable Electrics.  Portable in the sense that it’s not built into in a cabinet maybe, but it might surprise folks used to modern machines to learn that the 201K3 Portable in its bentwood case on the floor behind me now weighs in at 19.1Kg.  That’s why one of the very first things you learn with a 201 portable is to move the thing about as little as possible!

Incidentally, the difference between a 201K2 and a 201K3 is that the former has the direct-drive (so-called “potted”) motor while the latter has the usual bolt-on motor with the pulley and the belt.  And for what it’s worth, I do appreciate just how wonderful the all-gear drive is, but I wouldn’t buy a K2 on the grounds that if the motor packs up, you have a problem.  Replacement motors of the usual bolt-on type for a K3 are all over the place whether used, reconditioned or new equivalent, but good 240 volt replacement “potted” motors are like the proverbial.

“This, the lightest of the Lock-Stitch Hand Machines …” still weighs 14.5Kg in its natty fake snake/crocodile skin suitcase, but of course Singer didn’t tell you that in the brochure!  Interesting that at this period the portables were available in your choice of suitcase-type or bentwood case. 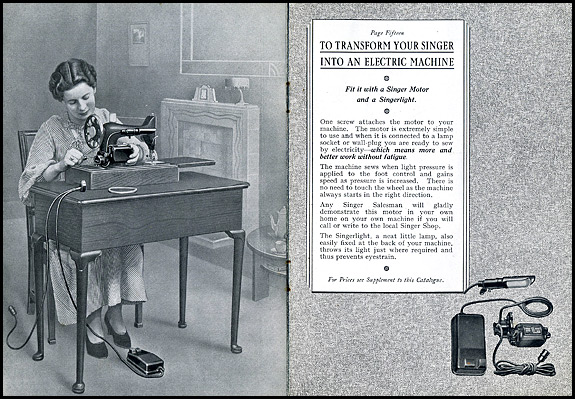 Oh dear, that mirror over the fireplace is way off-centre!  But who cares when by simply fitting a Singer Motor to the machine, one can do “more and better work without fatigue”?  And the friendly chap from the local Singer shop will be delighted to pop round and demonstrate at your convenience too.  I’m sure he won’t say anything about the mirror.

And here’s another rare bird in the UK – the one-drawer drop-leaf table with the bentwood cover and the bigger-diameter treadle wheel for faster sewing.  Again, this is one we’ve never actually encountered in the wild.

And finally, the usual page explaining why you should not be discouraged by the trimming and finishing required to finish your new frock, when you can buy a box of tricks like this and instead “be thrilled with the dainty sewing you can do” with their help.  Quite.

Now, we may not know when this brochure was picked up, but we do know from where … 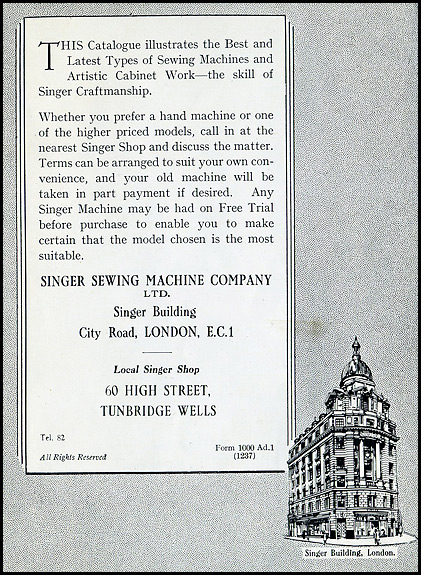 Yep, from the local Singer shop at 60 High Street, Tunbridge Wells, which just happens to be less than 10 miles away from where I’m sitting.   60 High Street is the right-hand half of what is now a double-fronted furniture shop …

We’re also familiar with The Singer Building in City Road, London, as illustrated on that page above.  And even though most of it’s now a Travelodge (of all things!) it still looks much  the same as when it was built …

If you’re ever in that neck of the woods, it’s on City Road almost opposite the Honorable Artillery Company’s barracks, and you can find it on Google Maps by using the UK postcode EC1Y 1AG.

It looks like the Singer Building did well to survive the last unpleasantness intact – it’s smack bang in the middle of the blue circle I’ve drawn on this map of a small part of London town, and according to a rather remarkable new website called Bomb Sight, those red dots are the bombs which were recorded as having been dropped on that area during the London Blitz of 7th October 1940 to 6th June 1941.

And that’s it for this week, folks, except to send greetings from Elsie and me to anyone else who will be celebrating Yule later today.

Have a good weekend!