Or the domed lid, as some say.  I’ve even seen it referred to as a doomed lid.  But whatever you call it, Polly was confused by hers.  She’d bought a knee-lever 201K in a bentwood case, and wondered what she was supposed to do with the lever when she’d finished sewing and wanted to pack the machine away.  Somebody had told her it clipped into the lid, but Polly couldn’t see how.

To cut a long story short, it turned out that although Polly’s bentwood lid fitted her base properly, it wasn’t actually the right lid for her machine.  It wasn’t a knee-lever lid, so it didn’t have the appropriate hardware.  We got there in the end, but it would have been a heck of a lot easier if I could have found these pictures that I took ages ago.  But I couldn’t.

However, a minor miracle has occurred and I have now, so just in case it helps anybody else to know, here’s a concise guide to what should be in the bentwood lid of your knee-lever 201K …

In the picture above, we see the lever held in place inside a kosher lid.  The machine end of it’s in the bracket on the case end, and the knee end of it’s clipped to the top of the case.

That’s a clearer picture of the fitting, and it also shows the wire clip for the box of attachments.  And by the way, a Godzilla box does not fit in that clip – it’s meant for the green cardboard box which measures about 6 x 2.5 x 1.5 inches. 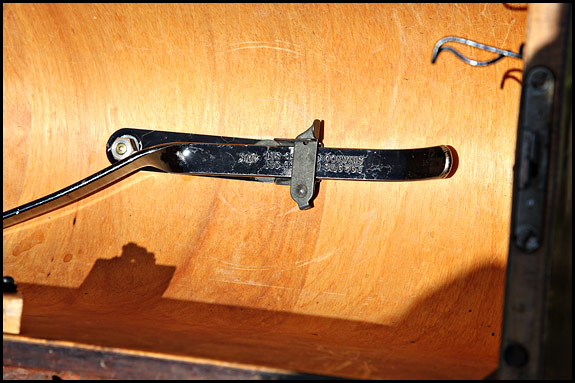 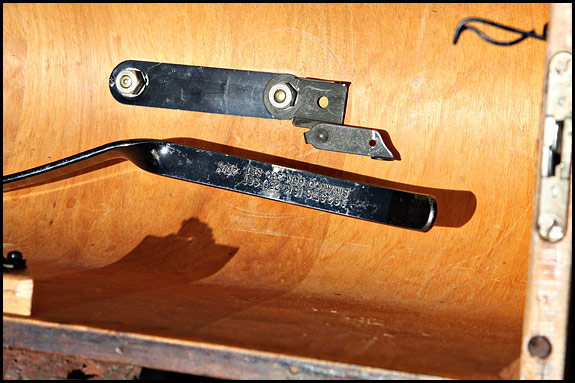 Hopefully you can now see clearly how that clip works, and also that it’s held in place by one of the nuts which secure the handle to the lid.

And while we’re at it we might as well do the extension table fittings, because it’s not exactly obvious how they work.  That grey thingy towards back left in the picture above is part of the answer, but the curly black wire at bottom right is nothing to do with it.  That’s the clip for the oil can.

That’s how the extension table fits in one of these cases.  It goes in with the bit of wood with the two screws facing inwards, and the metal tongue thingy which is on that end of it engaged in the grey metal doo-dah on the end of the lid.  With a bit of jiffling and a modest amount of luck, the extension table will then sit close enough to the side of the case for you to be able to swing the metal catch over the corner of it, which should keep it safely in place.

Having said that, bearing in mind all the gubbins in one of these case lids, I often wonder how long some of these machines had been out of the shop before they got a dink or two in the finish – particularly if it hadn’t yet occurred to the proud new owner which way round the lid needed to be before they lowered it down to the base …

Typical!  We’ve had a knee-lever Singer 99K lurking in a corner of Elsie’s sewing room for ages, and today we sold it.  And no sooner had I closed the front door behind the proud purchaser than I realised I hadn’t taken any pictures of it set up ready to sew or of the inner workings!  So here’s a brief explanation of the knee-lever controller, minus some snaps which really would have been a big help.  But I’m sure we’ll manage somehow.

OK, check out that page from the 1930 US Singer catalogue, which shows a knee-lever 99K all plugged into that cute wall light fitting and rarin’ to go.  Now take a squint at this picture, which is of the 99 we sold today, sitting quietly on our kitchen table with its awesome 1960’s plastic tablecloth which stops sewing machine oil soaking into the wood  …

Notice how it looks much like any other early 99K – until you spot that hole to the right of the base.  That’s the magic hole into which you insert the Knee Lever, which is the black metal queerthing hanging in the back of the case …

The down-pointy end of that is the one which plugs into the hole in the front of the case, and t’other end is the go-faster bit.

OK so far?  How it’s used is simplicty itself.  Place the machine on your table close to the front edge of it, plug the usual old Singer plug into the socket under the balance wheel, then insert the knee-lever into that hole on the front.  It only goes in one way and there’s a bit of a knack to it, but once you realise exactly how it fits, you’re laughing.  You then switch the power on at the wall socket (‘cos nowadays we don’t run sewing machines off a light fitting) and prepare to do some serious sewing.

It’s at this point that you wonder why on earth the lever doesn’t hang more or less straight down, as you might expect it to.  It actually hangs at about 7 o’clock, and that seems all wrong – until you realise that Singer in their wisdom wanted you to sit more to the left than you perhaps normally would, so you move your chair accordingly.  Et voilà, the lever falls conveniently against your right knee (or lower thigh, depending) and off you go.  A gentle right-wards pressure speeds the motor up nice and progressively, and when you return your leg to its resting position, the motor slows and stops.

How it works is simple.  Inside the compartment on the right of the base, under a slightly different black steel lid to the usual one in that this one has a screw holding it shut, is the mechanism of the speed controller.  It’s pretty much the same as is in the usual floor pedal.  When you insert the knee-lever into the magic hole, it connects via an ingenious linkage to the actual speed controller thingy, which doesn’t care in the slightest whether its innards are moved by a lever or by a button on a box on the floor.

So now you know how it all works, you’re wondering why.  As in, what’s the point?  Well, for a start, if you’re not blessed with two feet which work pretty much normally, and especially if you’re in a wheelchair, the knee-lever is brilliant.  You don’t have a foot pedal kicking about on the floor with a wire running from it up to the machine, and there’s only one wire coming out the plug under the balance wheel.  And after that, I’m struggling …

I have no idea when Singer dropped the knee-lever variant, but it was certainly after 1951 because the 99 in that snap is a Centenary model.  Nor am I sure for which models it was available, but I do know that I’ve seen a knee-lever 66, a 99 and a 201.

Elsie’s not a big fan of knee-levers, and as far as I’m concerned they’re just an interesting variation on the normal.  From my point of view, though, they have two drawbacks. One is that they’re a pig to re-wire because of the way the wiring’s crowded in on the machine (and in view of their age, most of them need re-wiring).  The other’s that although the actual conversion to foot pedal control is straightforward enough, you’re left with that hole in the front of the base and you need a new lid for the side compartment.