I only found out today that if the fates deal you either a Ruby or a Vanguard buttonholer with no instructions, the interweb is not a lot of help to you, so in an effort to rectify that situation, here we go with a crash course …

The common Ruby Buttonholer (the “Type R-B”) might be a different colour to the Vanguard Buttonholer, and it may or may not have an extra adjustment on it, but they’re essentially the same thing so the following instructions apply to both.  Note that your Ruby might have with it a chromed steel queerthing about 2″ long which has TA(103) stamped on it, but don’t lose any sleep over that.  It’s just an alternative means of attachment which was provided for fitting a Ruby to an industrial sewing machine.  Quite why the guys in Japan imagined anybody might ever want to do that is way beyond me, but they did.

Buttonhole attachments for straight stitch machines all work by feeding the material relative to the needle in such a way that a zigzag stitch is formed in the pattern of a buttonhole.  The needle stays put and goes straight up and down same as ever, but the fabric under it goes pretty much all ways at once.  To use these things, you need either to drop your feed dogs or cover them up, so your buttonholer should come with a chromed steel cover plate and the fixing screw for it.  If it didn’t and your machine won’t let you drop the feed, any cover plate which fits should work, as long as the needle will centralise in the hole and the plate will stay in place.

OK, on to the device itself.  The red knob on the top of it is what you turn in order to make it do its thing when it’s not on the machine.  Turn the red knob clockwise and the moving parts will cycle through the full range of movements used to produce a buttonhole.  Turn it anti-clockwise and all that will happen is that it will eventually come off, but helpfully, an arrow is provided for those who have never been good with clock and anti-clock.  It might have been more helpful still to make the head of that arrow far more obvious than it is, but apparently we should always be grateful for small mercies.

With most of the Ruby/Vanguard buttonholers, you can set three variables – stitch length, buttonhole width and buttonhole length – but sometimes you can set four.  Gosh.  How exciting is that?  I don’t know, but let’s look at each adjustment in turn … 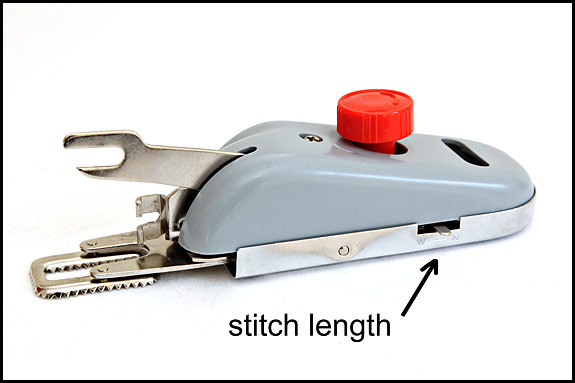 The “buttonhole width” lever clicks into one of three positions, and as you might have guessed, it determines the overall width of your buttonhole.  “1” is the narrowest.

If you’re still in any doubt about what manner of gizmo it is that you’re playing with, that will now become obvious as we come to the setting of the length of your buttonhole.  For this you need both a screwdriver and a sense of humour.  See the screw that’s visible through the slot in the casing?  Yep, that’s your length adjustment, and it’s only really accessible when the planets are in the right conjunction.

OK, that’s not strictly true, but in order for your screwdriver to have any hope of turning that screw, you need to turn the red knob clockwise until the screw’s positioned itself more or less central under the slot in the cover.  Only then can you slacken it off, move it along the slot in the metalwork and re-tighten it.  If you hold the buttonholer with the slot towards you, you move the screw to the right of its slot for longer buttonholes, to the left for shorter ones.  In theory the middle of the slot gives you a buttonhole getting on for 3/4″ long, or around 18mm-ish on a good day.

So you now know what the three adjustments are, but not how you actually drive the thing.  Obviously we need to fit it to the machine, but first we need to either drop the feed or cover it.  If you have a thread cutter fitted, we then need to swing that round to roughly where the one in the picture below is, so as to ensure that it’s not going to interfere with the drive to the buttonholer.  Only then do we fit the buttonholer itself …

Now, the first time you try this, it will be fun.  I reckon you’re better off getting the hang of fitting it without a needle in the machine, but the general idea is that you end up with the slot in the end of the arm of the buttonholer over the collar into which your needle clamp screw goes, and the device itself fastened securely to your presser bar by means of the thumbscrew used for your normal presser foot.

If you’ve got it right, the body of the buttonholer should be square on to the bed of the machine, and just about level when the presser bar is raised.  When you cautiously turn the balance wheel towards you, you should see the needle clamp moving the arm up and down, and that in turn causing the buttonholer to strut its stuff.

Assuming all seems to be well, it’s then time to re-fit the needle if you removed it, and thread the machine as usual.  Before you start mass-producing buttonholes, though, try to contain your excitement long enough to turn the red knob until the needle is at one end of the buttonholer.  Makes no odds which end and it’s not strictly speaking essential, but it’s good for the soul. Then off you go.

Note that you’ll probably have to faff with your top tension a bit and maybe even your presser foot pressure.  And it’s usual to go round the buttonhole twice.  Maybe even three times … 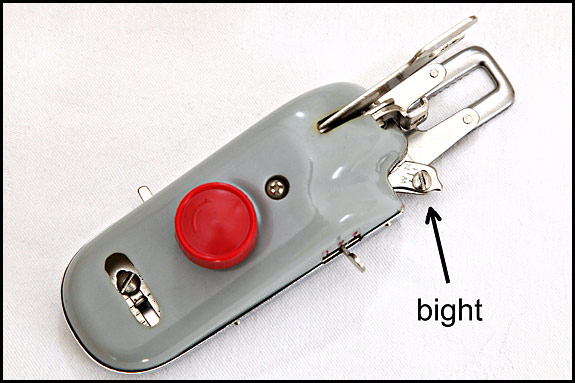 And here’s the fourth adjustment, which may or may not be present on yours.  If it is, it enables you to vary the bight i.e. the width of the actual zigzag stitch which the buttonholer produces.  This time the “W” and the “N” make sense even to me, because they stand for “wide” and “narrow”.  The range of adjustment isn’t huge, but it doesn’t really need to be.

And that’s about it!  Neither the Ruby nor the Vanguard is as good as the 86662/86718, but once you get used to their peculiarities and their limitations, they do in fact make quite a decent buttonhole – certainly one that’s better than the auto ones on many modern machines.

One final thought, which actually applies to any buttonholer really, and also for that matter to zigzag attachments .  If you tend to “drive” the fabric as you’re sewing even though you know you shouldn’t, do try and train yourself to stop doing that!  Let the attachment do the feeding 🙂