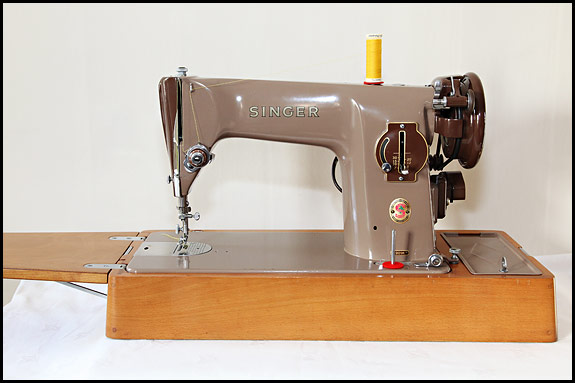 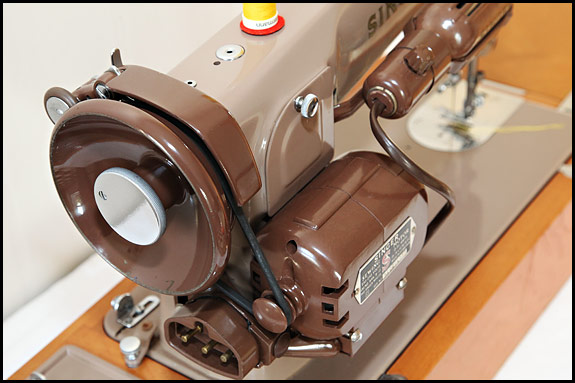 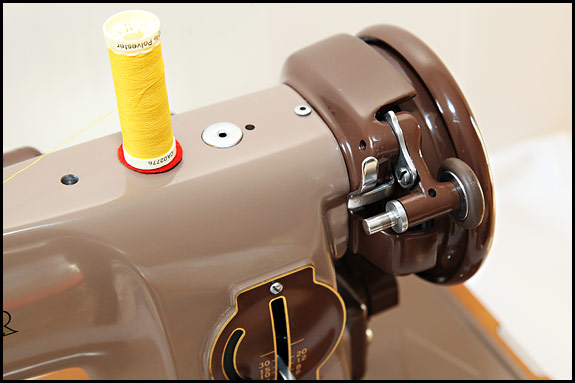 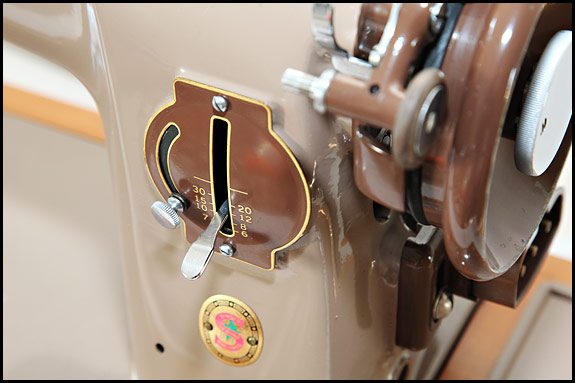 Well, I finally finished the bathroom cupboard and between us we got it painted (magnolia – we’re not very adventurous where decorating’s concerned).  No sooner had the paint dried than I set up the studio i.e. put the board over the bath, spread out the white hotel tablecloth on it, plonked a sewing machine on top and started snapping away.

And when I came to open the files in Photoshop, I discovered that oh poo the new magnolia-coloured “wall” was now producing a colour cast.  Long story short, the studio has now moved into our bedroom.  The board and tablecloth which sat on the bath now sit on top of The Harmonium, as the later Singer drawing-room cabinet is referred to (‘cos we think it looks like one when the machine’s down and the top’s over), and as long as I time the picture-taking to avoid the direct sun which comes in around noon at this time of year, I have better light now as well as more room to move.

Anyhow, these ‘ere snaps fresh from the new studio are of a really nice 201K23 which we’ve now added to the “Singers for Sale” page, and I’m not saying anything more about this machine now lest I be inclined to go off on one about the way 201’s are hyped up on Ebay.  Having said that, though, I can’t help wondering how come an identical machine to this one seemingly in similar cosmetic condition but with a scruffy case lid has this very evening sold on Ebay for £170!

Whatever, we finally realised over the New Year that we do indeed have a surfeit of buttonholers (you can say that again -E), so I’ve just added a Singer 160506 (the one in the green plastic case) with extra templates, and before much longer I’ll be adding still more to the “Bits ‘n’ bobs” page.

There’s another Swiss zigzagger listed now too, by the way, and I must say you’d be hard pushed to find a better one either here or in the States.

Finally, having for the last two months been burning a load of timber we scrounged from a building site, last week we managed to clear enough space in one of our log sheds for a couple of loads of proper logs from our friendly neighbourhood log lady, and we finished stacking those this afternnon.

In case you ever need to know, I can now tell you with some authority that an average pickup load of mixed hardwood logs cut at 10″ and split consists of about 330 logs, which when stacked one row deep along a wall amounts to 33 square feet of logs, or a stacked volume of 0.7 cubic metre.  And round our neck of the woods, that’s very close to 25p a log, which I guess seems expensive – until you weigh up the advantages of heating by woodburning stove …