OK … we’re going to assume here that you’ve de-fluffed your machine above and below decks to the best of your ability, and that nothing of any importance ended up in your Dyson while you were doing that.  You’ve thrown out that tin of horrible 3-in-1 oil that you would have used if you hadn’t had the error of your ways pointed out to you, and you’ve got some loo roll or whatever handy to mop up the drips.  And if you haven’t got the real instruction book made from dead trees, you’ve got a PDF off the interweb so as soon as you’ve taken the bobbin out and unthreaded your needle, you are, as people keep saying, good to go.

Now if it hasn’t already occurred to you that the diagrams in old Singer books are not always clear about where exactly you’re supposed to be poking the spout of your bottle of oil, it soon will.  Don’t worry though, because on a vintage Singer, if it looks like an oil hole, it probably is – especially if it’s on the top of the machine.  And if it isn’t an oil hole, you won’t have done any harm by applying a couple of drops of oil there by mistake.

Ideally you do the top oil holes first with the needle at the top of its travel so the works are best aligned for having oil dropped on them, but how much oil to apply?  The textbook answer is “a drop or two every 8 hours sewing” but that’s a counsel of perfection, so my advice would be to use your common sense and if in doubt, apply too much rather than too little.  You won’t jigger anything up, and the excess will just drain out in the fullness of time.

Incidentally, while you’re concerning yourself with the oil holes on the top of your machine, it might be an idea to check that nobody’s whacked a spool pin into one of them.  The book might not be clear about your oil holes, but it will be clear about where your spool pin(s) should be.

Turning now to the front of the column, if there’s an oil hole on the bobbin winder, it’ll be just to the right of where your bobbin fits on, and one drop in there will do it.  Much more than that risks oil getting on the rubber tyre, which is Not Good.  When you’ve done that, give it a bit of a twirl to start the oil soaking in.  While you’re in the area, if you have the screw in – screw out type of stitch length adjustment, wind that out as far as it’ll go and put one drop on the top of the threaded bit before winding it back in to spread the oil.

If your machine has a cover plate on the back of the column which is held on by a thumbscrew, swing the plate out the way and take a look inside.  Now rotate the handwheel and see what moves and what doesn’t in there.  You might need a torch.  Ideally you want to get some oil wherever two parts move against or rotate in each other, and also on any gears you can see, so give the handwheel a few turns when you’ve done your thing in there to work the oil around a bit.  Don’t forget to put the cover plate back.

Slide your slide plate (aka your bobbin cover) open, and see if you can see a bit of red felt.  Or a bit of felt that might once have been red.  If so, that needs a couple of drops of oil on it, and if your book of words says to oil anywhere else in the bobbin area, that’s what you do while you’re there.  By the way, note that if there’s a hole in your needle plate (the chromed plate on the bed through which your needle pokes), that hole is NOT an oil hole, and neither is/are the threaded hole(s) in the bed a couple of inches to the right of the needle.

And before we move on to furtling behind your faceplate, a couple of notes for 201 owners.  Don’t squirt oil down that oil-hole that’s on the column itself until after you’ve done the underneath (that’s the hole labelled “OIL” I’m on about – the one that’s more or less behind your bottom spool pin).  And strange though it seems, that felt pad inside the chromed thing on top that you twiddle to alter your presser foot pressure is actually meant to be kept oiled.  The theory is that it soaks down and stops the rod seizing up that your presser foot’s on the end of, but personally I wouldn’t bank on that.

Now you need to take off the faceplate (if it’s not obvious, your book will tell you how), and once again see how everything does its thing when you turn the handwheel.  The routine here’s the same – a drop or two on anything that’s moving against anything else, plus a drop on both the presser foot bar and the needle bar.  That’s the rod that goes up and down when you lift and release the presser foot, and the one that your needle’s on the end of.

OK, having put the faceplate back on and checked you’ve done everything on the topside of the machine, all that’s left to oil is the workings down below.  This is a lot easier if you take the machine head out of the base and lay it on its back on several thicknesses of newspaper, but if you don’t fancy doing that, don’t worry.  Just do the best you can with it hinged up as far as it’ll go and propped there by whatever does the job, and take comfort from the fact that most old Singers keep running for donkey’s years despite not having been oiled properly since the Coronation.

If you can turn the handwheel with the head on its back or propped up as far as it’ll go, do that and marvel at the way things go in all directions under the bed when you do.  Once again, the idea is to get oil wherever anything moves against something else, and most of those places are obvious.  Note though that there are rods running left to right which at first glance seem not to move much if at all when the handwheel’s turned.  They actually just twist a bit backwards and forwards all the time, and the way you oil those is to try and get a drop or two right at each end, where the rod stops and a threaded thingy goes into it.

If you’re oiling a 66 or a 99, there’s one particular area where the diagrams are not much help at all.  There’s a couple of steel rollers about 8mm diameter hiding in the works under the bobbin area, and they are not easy to see if your machine’s hinged open in a case or a treadle base.  They’re not easy to photograph in situ either … 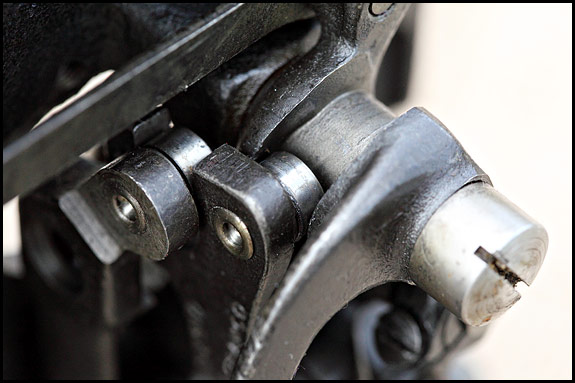 So I had to cheat with these two and remove the feed dog and the connection to it so you can see what’s what, and then take the snaps from the back of the machine.  As you can probably appreciate now, those two rollers are not obvious, particularly if you can only see this area from under the front of the machine.

Try and get some oil on them if you can, but don’t worry too much if you’re not sure whether you did.  Truth is most people never go anywhere near them with a bottle of oil.

One last point for owners of 201’s.  You know I said don’t squirt oil into that hole at the base of the column until after you’ve done the underneath?  If you do, the surplus oil will drain down into the cylindrical metal housing round the gears at the bottom of the column, and drain straight out of it when you tip the machine back to get at the underneath.  So for 201 owners, the last job underneath is to get some oil into the corresponding gear housing that’s under the bobbin area, drop the machine down onto its base and then squirt a goodly dose into that oil hole marked “OIL”.

Finally, don’t forget that you’ll need some kitchen roll or whatever under the machine for a day or so until all the excess oil’s drained away.  We also fold a few sheets of loo paper and put them under the presser foot overnight to soak up any drips, then wipe carefully round the needle clamp and presser foot before sewing with some scrap fabric to make sure we’ve got rid of any excess.