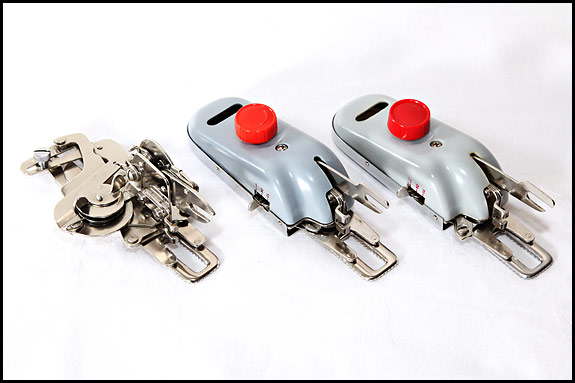 From the left we have here the big Ruby buttonholer, the Ruby Buttonholer Type RB, and the Vanguard Buttonholer.  The big Ruby’s the odd one  out, so if we ignore that and concentrate on the other two, what differences do we see?

The first difference is body colour, but that’s actually no help at all if you’re trying to tell them apart, because we’ve seen both of them in all kinds of blue-grey and grey-grey, as well as one or other of them in a sort of buttermilk/pale cream.  I have a feeling we’ve also seen a black one, but I wouldn’t swear to it.

The other visible difference between those two is that little doohickey sticking out towards the front of the Vanguard, to which this red arrow is pointing …

But alas, the presence of that stitch width wotsit does not mean it’s a Vanguard!  Nope, there are Vanguards with and without that, and the same goes for the Ruby.

It really is the case that if you haven’t got the box or the instructions, you can’t tell them apart, because they are indeed one and the same thing.

So, if you see a Vanguard Buttonholer for sale, it’ll look like either of those two with the plastic body but it may be a different colour, and it may or may not have variable stitch width.

If you see a Ruby Buttonholer for sale, it could be that contraption on the left in the team photo, but it’s more likely to be the plastic-bodied one.

If you see a Ruby Buttonholer Type RB for sale, it’s definitely the plastic-bodied one.  It may or may not have variable stitch width, and it may or may not have with it Part Number 17, which is the means by which a Ruby RB can allegedly be fitted to an industrial machine – as if anyone would want to do that.

We have nice examples of all three for sale on the Bits ‘n’ Bobs page, where you’ll also find snaps showing the boxes and instructions.