Yes indeed, the rhubarb season is upon us once again, but before we get to that, I’ve been asked to do a thing on rewiring a 185K which has the permanently-connected mains leads, as opposed to the plug-in ones used on pretty much every other vintage Singer domestic.  So here we go … 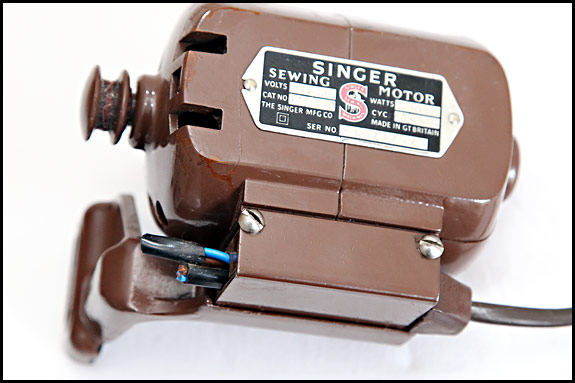 Now, you’ll have to pretend a bit here, because that’s the only 185 motor I can find right now and when it came to us it had already been rewired.  Badly.  If it was still original, those two cut-off black cables on the left wouldn’t be cut off, and they’d be brown, and they’d have a brown plastic thingy round them where they come out of the terminal box under the motor, like the cable on the right does.  I cut off those replacement leads to the mains plug and the foot controller when we bought this one in, but you can still see what a lash-up it was.

(In case you’re wondering, yes, that is a bunch of threads wrapped round the motor pulley, and no, I’ve never worked out how that happens either.)

That single cable going off to the right goes to the Singerlight, and it has its brown bush/sleeve thingy present and correct.  The reason why the corresponding one’s missing from the left hand side is doubtless because whoever did the wiring found that it was, to use a technical term, stuffed.  Those brown bushes harden with age, the lugs on them which keep them secure in the hole tend to come off, and when that happens, they are as much use as a chocolate teapot.

So he put it back together without one on that side, as we see more clearly below … 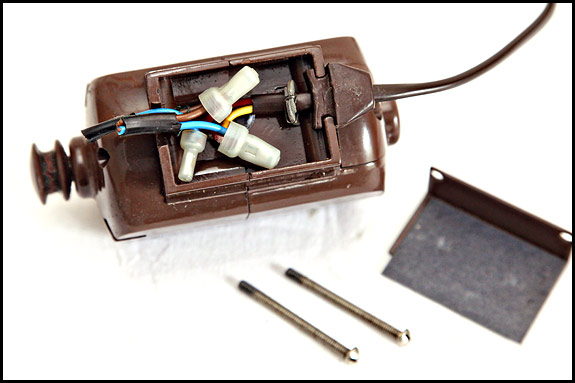 There’s your plastic bush on the right with the Singerlight lead going through it, and you can see what I mean about those lugs.  It won’t matter greatly if those particular ones come off because the lead to the Singerlight doesn’t generally get waggled about a lot, but the ones to the foot pedal and mains plug certainly do.  That’s why they need one of those bushes round them, and also some proper strain relief.

That light-coloured thing round the Singerlight lead just inside the bush is the original strain relief – a cunning little two-part affair made of fibreboard and a spring clip, which works well on the original flat twin cable but doesn’t work at all on anything else.  It’s also a pig to remove and replace, unless you’re privy to a secret technique handed down across the generations by horny-handed sewing machine repair men.

But what, you ask, are those off-white queerthings?  They, dear reader, are Scruits, unless you’re in the States, in which case I think they’re wirenuts.  But I’m not really sure.  Whatever, they used to be a very common way of joining two or three stranded conductors together, and they work a lot better than you’d think.  Basically all you do is strip half an inch or so of insulation off each conductor that you wish to join, align them alongside each other, and twist the ends together clockwise.  You then screw the Scruit on, remembering to twist it clockwise, and bingo – the metal inner of the Scruit tightens itself onto your wire ends and you have a secure connection.

The Scruits in the picture are the later nylon-bodied type, and these particular ones have been crimped after they were screwed them on, presumably because whoever fitted them had no faith in the Scruit doing its job and no intention of ever undoing the connection.  Earlier Scruits came in a truncated conical form made of hard black plastic, and earlier still they were porcelain.  I like Scruits, I do, but then I was brought up when they were still widely used. 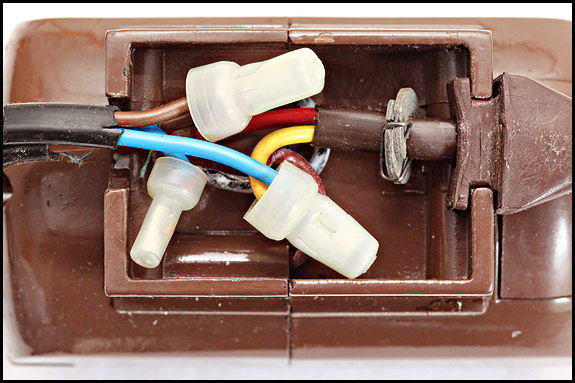 And that picture illustrates why re-wiring a 185K is seldom a straightforward business.  It’s not the Scruits that’s the problem, but the lack of strain relief and of a suitable bush when you can’t re-use the original  one.  Frankly I have no suggestions as to how you might go about making a proper job of it in the absence of a re-usable bush.  All I know for sure is that if we couldn’t rustle up a bush in good condition and also come up with an effective way of providing suitable strain relief for the new cables, we wouldn’t offer the machine for sale.

So there you go.

Moving on now to rhubarb, ours is at least a fortnight late this year because of the horrible cold weather.  We picked a bit last week because we really fancied stewed rhubarb and icecream for pud and while we were at it we made half a dozen jars of jam, but today was the start of the season proper with 21lb picked this morning.  That’s filled thirteen Kilner jars with enough left over to make a gallon of rhubarb wine … 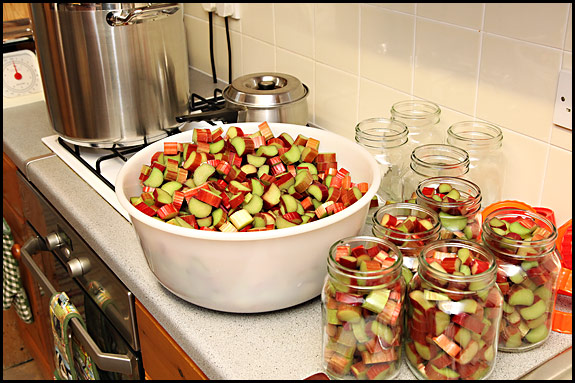 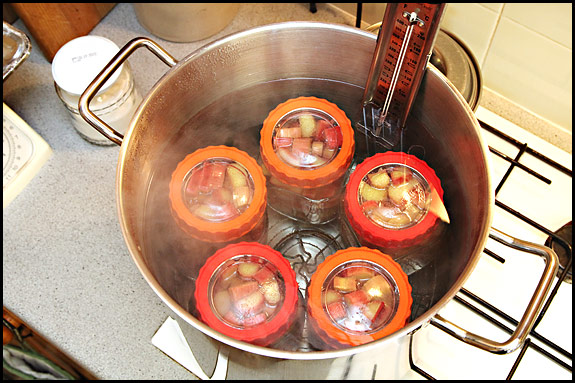 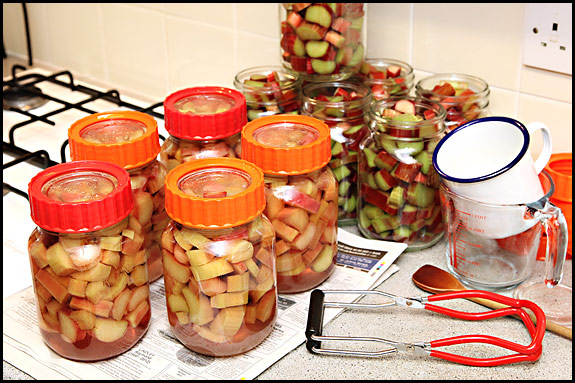 This year we’re trying out the water-bath method of bottling because Elsie’s sure it uses less energy than doing them in the oven, and rhubarb’s a good subject to test the method with because we’ll have an abundance of it for the next few weeks.  If we get any jars which don’t seal properly, we can always put them in the fridge for eating soon then just pick more rhubarb and try again.

Readers who are into this sort of thing may care to note that our rhubarb is a mix of Hammonds Early and Brandy Carr Scarlet, the lifter-outer in the foreground is from Lakeland Plastics and is essential for this method of preserving, those Kilner jars are the 1978-1990’s type which are known as Red Tops irrespective of whether the rings are red, orange or white, and if you’re after spares for your Kilner jars, it’s worth checking out this site

We’ll probably do another dozen or so jars of bottled rhubarb this coming week (each jar makes 2 crumbles), but we’ll also be making a lot of scrummy rhubarb and elderflower jam because judging by the look of the blossom, we’re not going to be making much damson this year.

Finally though, a question for our American and Canadian readers about home preserving terminology.  Where you are, do you guys call this procedure bottling, or is it canning ?