And before I go any further, let me say that we’ve never been sure of the correct designation for the base shown in the following pictures.  If you happen to know and can point us in the direction of the relevant brochure page or whatever, we’d love to hear from you!

OK, you can ignore the incomplete 66K which I plonked into this base just for the picture, because it’s only the base with which we’re concerned here.  And yes, I totally agree with you – it would have been nice if whoever covered the top of this one with a coat of varnish had at least tried to quieten down those watermarks first.

But never mind.  We happen to like these particular bases, and not only because of the very neat way in which the larger of those two inset sections of the top lifts off to form the extension.  Mainly we like them because more often than not, they still have the bits on them which you need to make them convertible, in the sense that you can fit an electric head to one and then have the option to treadle it or use the motor as the fancy takes you.

If however the motor controller’s been removed from one of these bases, it’ll be just like any other late-type treadle base underneath.

If all this is new to you, note that that picture’s taken from the back of the base, simply because it’s easier to see how the Pitman rod (note technical term) connects the treadle plate to the crank, so as to make the wheel go round.  What you see in that picture is what all these later domestic treadle bases look like – allowing for the fact that this one hasn’t got a belt on it!

If we look up from that angle and move round to the front of the base then hang a sheet over the back of it while we take some snaps, the underneath looks like this, which I admit is kind of boring.  However …

While that’s fine for treadling your full-size (eg 15K, 66K or 201K) vintage Singer, what to do if you want the option to use an electric machine in this base?  Well, you could just fit the head into the treadle base, plug in your machine plug and use your foot controller like you do with the machine on the kitchen table.  But it will immediately become obvious that you can’t put the foot controller where it needs to be because the treadle plate’s in the way.

What you need is … 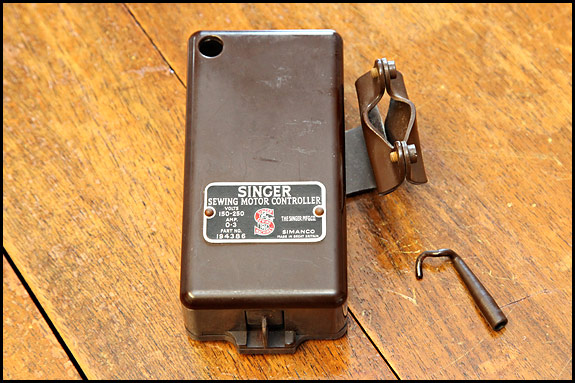 That’s Singer Motor Controller 194386, that is, with the correct bracket to fit it to the later-type treadle bases (as opposed to the ornate cast-iron ones, which need a different bracket), together with that curly doohickey at bottom right.

The 194386 is to all intents and purposes a normal foot controller with its button on the top replaced by a metal tongue with a hole in it sticking out of one end, as you might be able to see above. The hole at top left of the cover is the cable entry, and we will very shortly see what the doohickey’s for.

So OK, let’s say you’ve found yourself one of these treadle bases, and you rather fancy putting your 201K electric in it so you have the option of either mains or people power.  What’s involved?  As far as I recall from the last time I did it, this is what’s involved …

1  Check that you have the bits shown above, and also the black metal plate which goes to the right of the machine bed and fills the 45mm gap which would otherwise exist.  You can see that plate in the top picture, but what you can’t see is that there are three holes in it – two for the treadle belt to pass through and one for the lead to the motor controller.  The plate screws to the underside of your machine bed, so you finally get to see what those two threaded holes at the far right of your machine bed are for 😉

2  Screw the plate to the machine bed, put a rubber bush in the hole through which the mains lead will go, and fit your machine head to the base via the pins of the hinges, just the same way as it fits in its wooden base.

3  Make absolutely certain that you tighten the grub screws onto the pins of those hinges.  Then check again that both are secure.  If you don’t, guess what can happen the first time you lower the machine head into the base.

4  With the mains disconnected from the wall socket, open up your existing foot controller and disconnect the two wires of the lead which goes to it.  Put both terminal screws back so you don’t lose them, then put the case back together.

5  With the mains still disconnected, plug your machine plug into the machine, and pass the lead you just disconnected from your foot controller down through the hole in that side plate.

6  Open up your Controller 194386, pass that lead through the hole in the cover, and fit the two wires to the terminals of the controller just like they were on your foot controller.

11  Now try it with power on, and with any luck you’re in business.  Note that you can to some extent adjust the slope of the treadle plate when it’s at rest by screwing the Pitman rod in or out of the doohickey.

12  If you’re sure that everything’s to your liking, tidy the excess mains lead out of the way for now, then power up and see how it goes.

13  When you have the electrical operation sorted, get yourself a nice new treadle belt and fit it.

14  Turn off the power.  Disconnect the Pitman rod from the doohickey, re-fit it to the crank on the treadle wheel (screwing it in as far as it’ll go), pop the belt into the groove behind your balance wheel, ease the belt onto the treadle wheel, and savour the joy of sewing with a treadle machine.

And that’s about it.  Unless you’re used to sewing by both mains and people power, it’s probably best to live with the electrics like this for long enough for you to know for sure that you’re going to keep the machine in this base.  Then you can get rid of the excess length of mains lead and tidy things up – and that’ll be another blog post sometime!