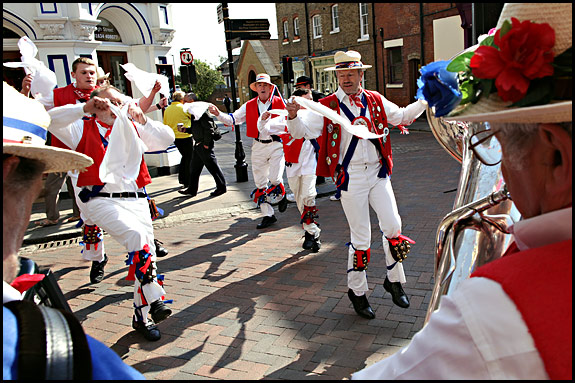 ’tis the first of May.

Or so the young people of this fair land were wont to sing in days of yore.  Allegedly.  Come to think of it, that’s exactly the kind of ditty a Morris side would sing as a prelude to a dance.  Not that I have a penchant for Morris dancing, you understand.  Oh no.  Not me.  But if I did have, it wouldn’t be for hankie-wavers like the chaps in that picture.   And certainly not for rapper sides or cloggers either.

Be that as it may, or indeed as it May, today marks not only the start of the Morris dancing season, but also a few changes around here.

One is that the “Bits ‘n’ Bobs” page has gone, and in its place we now have both an “Accessories” page and a “Parts” page.  “Accessories” has on it most of the stuff that used to be on “Bits ‘n’ Bobs”, and “Parts” is pretty much what you’d expect.  Or rather it soon will be, because at present it’s in a state of flux whilst I sort it out.  Do check it out from time to time, especially if you’re after a widget, a wossname, or even perhaps a doohickey.

Those of you who keep an eye on the “Singers for sale” page will no doubt have noticed that there’s been nothing new on there for several weeks now.  Funnily enough I’d noticed that too, and the reason is simple – we’ve had nothing new to list.  In the last month we’ve found new homes for a 99 and for three 201’s which sold before I had chance to list them, and that’s just about cleared us out of machines for sale, except for a few 99 hand-cranks still in the pipeline.  For that and several other reasons, we’re now shifting the emphasis away from machines and concentrating instead on accessories and parts for them.

One of those several other reasons is The Motor Car, which, if all goes well, we’ll finally be getting rid of this summer.  Experience taught us long ago that very few people can be relied upon to pack a sewing machine properly for delivery by Parcelfarce or courier, so if you want to buy in sewing machines, you need a car.  But when you don’t need one for anything else, it makes no sense at all to keep it.

More about being carless in due course, but for now, you may sleep easy in your bed knowing that what we lose by not having machines to sell we gain by having parts as well as accessories.  Business as usual, really – just a bit different.

As for Morris dancing … one of the very sad things about it is that when a halfway-decent side does turn out somewhere, nowadays most people don’t watch them dancing.  Instead, they stand around aimlessly taking rubbish pictures of it with their phones.  Furthermore, it seems to be inevitable that any video of Morris dancing that’s posted online will be so badly shot that it’s positively painful to watch, which is a shame.  This one’s actually better than most, so try to ignore the dodgy camerawork and be amazed by the real skill of a Border side from Sheffield called Boggart’s Breakfast as they dance The Impossible Dance.  You’ll see why it’s called that …