coming up the stairs this morning … 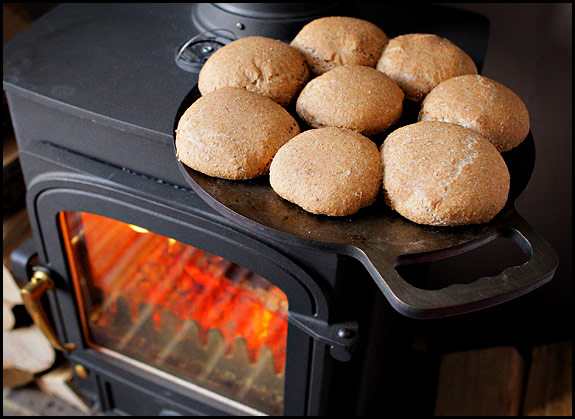 Neither of us can actually remember when we started making our own bread.  But we got our cast-iron mill so we could grind our own flour at least 20 years ago, and we got that because we were fed up with the half-stale bread flour we used to buy from the shops, so it’s true to say that we’ve been baking since the mid-1980’s.  Or thereabouts.

By “we”, I mean of course Elsie most of the time, but I also make breadbuns, as well as a very nice spelt scone (pronounced the proper way).  According to Elsie I’m far too particular in the making and I never let anything bake long enough.  According to me, Elsie is a bung it baker and always tends to over-bake so her bread has a rock-hard crust.  Fortunately the same doesn’t apply to her pastry, which is usually baked to perfection or thereabouts.

Whether making a loaf in the oven or bread buns on top of the woodstove, the recipe stays the same, and just in case anybody out there’s interested, here it is …

Grind 800gm of organic spelt grain.  Tip it into a large bowl and add 10ml of salt.

In a measuring jug, add 400ml of boiling water to 200ml of cold water, stir it and chuck out all but 200ml.  Dissolve 5ml of sugar in that, then with a fork whisk in 15ml of dried yeast powder (slowly!).  Put a tea-cosy over it and leave to fester for 15 minutes or so.

Chuck yeast liquid/sludge into the flour and knead for at least 5 minutes, adding warm water as required to get the right consistency – very pliable, but not sticky (YouTube might be handy if you’re completely in the dark about that).

Cover the bowl with a plate or whatever and leave overnight.  In the morning, knead again for a few minutes then either bung it in a bread tin and bake in a hot oven until done, or divide into 6-8 portions and bake on top of your woodstove.  For that we use a wossname which Elsie got online from some place in Welsh Wales, and it needs greasing (it also needs careful preparation when you first get it but that’s another story).  You need to remember to rotate it from time to time to even-out the temperature, as well as to turn the buns over as they bake.

The temperature of your woodstove matters greatly when baking on the top thereof, and it’s very much a case of trial and error.  If it helps to know, if you put a standard cheapo Stovax stove thermometer on the top of your stove, the ideal temperature for baking is towards the top of the central silver band, which is reckoned to be 230-250 Centigrade, though how accurate that might be is anybody’s guess.  If in doubt, go under rather than over temperature.

And here endeth the lesson for today, except to point out that apart from having a scrummy taste, one other advantage of using spelt flour is that it’s fine for people who can’t tolerate wheat.

On the sewing machine front we’ll continue with more of the same once all this festivity has settled down, but in the meantime, if you’re wondering what else I’ve been up to (apart from The Finishing Of The Bathroom Cupboard), check out Elnablog

The wossname is actually a Welsh Bakestone which I got from www.welshbakestone.co.uk and it is awesome.  If you have a woodstove, you should get one!   E.

The bakestone is in fact made not of stone but of very thick and very heavy mild steel plate, but it is indeed a fine thing to have.  S.

Trust you to have the last word.  E