Some people call them domed lids, and on the internets you’ll sometimes see them called doomed lids, but what we’re on about here are properly called bentwood case lids.  Specifically, Singer bentwood lids and how to open one without the key.  And if you’re thinking that surely any fule kno how, I can assure you that they don’t.

So, somebody’s inherited that old sewing machine of Grannie’s, and quite naturally they want to have a look at it now they’ve got it home.  But oh dear there is no key, so how will they get in it?  Enter the Man About The House, who takes stock of the situation, and in entirely typical fashion says “Leave it to me” as he reaches for his toolbox.  Naturally he can’t find in it the small chisel he had in mind for the job, but a Stanley knife and a screwdriver will do the business no problem … 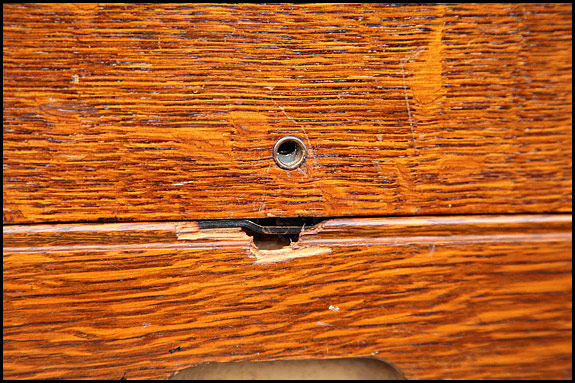 Having hacked away enough 70-year old polished oak to reveal what’s what, it’s immediately apparent to our hero how it all works and what’s called for, which is a small hacksaw blade with which to saw through the tongue of the lock, et voilà!  With a bit of jiggling, the lid lifts off …

Of course the lock is now useless and the base of the machine is damaged in such a way that it would take a skilled cabinetmaker to restore it, but hey, you can’t win ’em all.   The idea was to get the lid off, and the lid is now off.  Sorted! 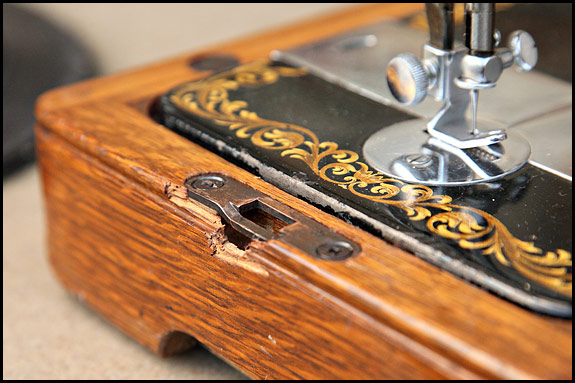 What a shame our hero didn’t try the obvious … 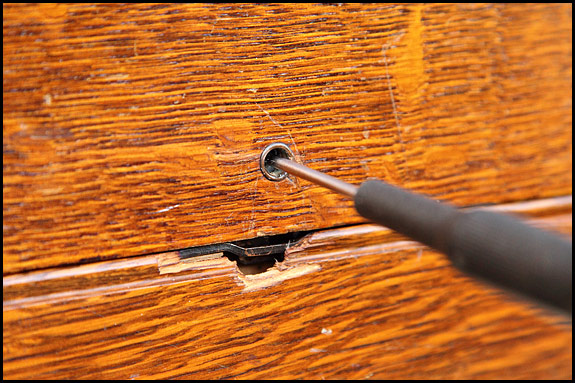 OK, what you need to know is that the locks on most Singer bentwood case lids are much of a muchness.  The keyhole in the lids we’re on about is round as shown above as opposed to keyhole-shaped, and if you take the lock out by undoing those two screws seen in the second picture, it looks something like this …

That oblong hole that you can see through in the middle of the lock is the hole into which the end of the key fits, and it’s actually in a part which is sandwiched inside the lock casing.  On some of these locks the hole in that outer casing will be a bit smaller than this one, on some a bit bigger and on others it’ll be chewed up, but it makes no difference as far as we’re concerned here.  Also, the (rusty) sticky-outy bit at the bottom shown above is only one of the two that should be there, because matey sawed the other one off this particular lock.

There should be one of those danglers facing each way.   When the lock’s locked, they hook under the ends of the slot in the metal plate in the end of the base, and that’s what locks your case lid.  When you unlock it, the two sticky-outy bits move back towards each other, so the hooks clear the end of the slot and you can lift the lid up.  It’s about as simple as it could get, but it works extremely well.

Now, there’s no prizes for spotting the similarity here between the proper Singer key and the small screwdriver which most owners of Singers in bentwood cases use instead.  Yes indeed, all you need to open one is a flat-bladed screwdriver like that with a tip that’s about 3mm wide, and having armed yourself with one of those, the correct procedure is as follows:-

Look into the keyhole (using a  torch if necessary) to get an idea of the size of the slot and see which way it’s aligned.

Poke your screwdriver into it.  If there’s no way you can feel it locating in that slot, try a screwdriver that’s a bit narrower.

Once you’re fairly sure your screwdriver’s in the slot, turn it clockwise.  It will probably be harder to turn than you were expecting it to be.

If you’re sure your screwdriver’s engaged properly but the lock won’t turn clockwise, try turning it the other way.

If still no luck, show somebody else this blog post and let them have a go.

If all else fails, apply a few drops of thin oil (or better still penetrating oil) and try turning one way then the other several times as the oil soaks in.

If you’re still stuck, come back and add a comment under this post and we’ll see what we can do to help!