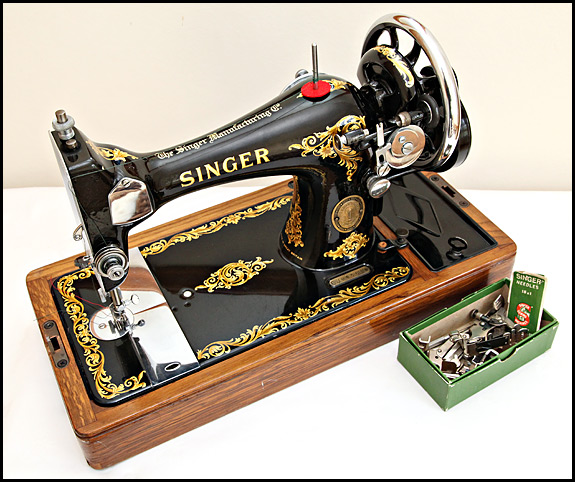 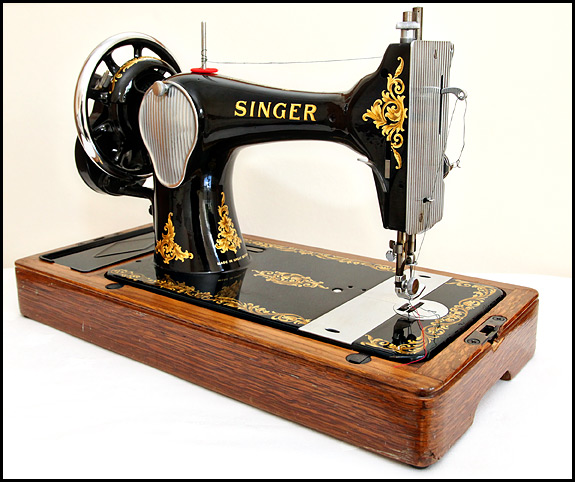 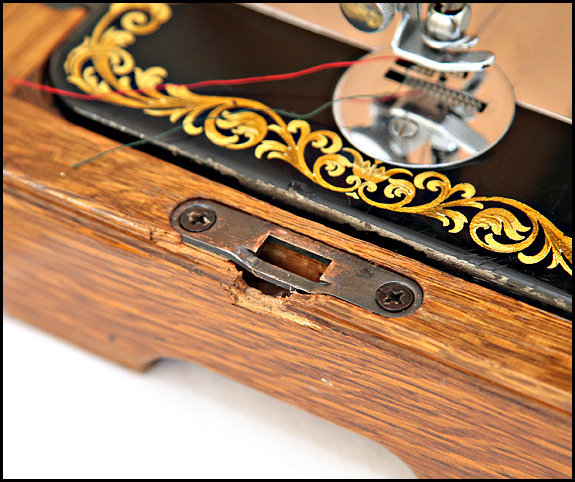 As regular readers will know, we very rarely have machines for sale nowadays.  However, there’s one of Elsie’s on the “Machines” page now because (a) she’s finally had to thin out her collection to gain some space in The Sewing Room and (b) the lady who took the other two which have just gone was convinced that her husband would divorce her if she went home with three more sewing machines.

This one’s a very nice and very late (1954) Singer 128K and it comes in an equally nice bentwood (“domed”) case, complete with what we think are its original attachments.  But there is, alas, a downside.  Some muppet has vandalised it a bit whilst taking the lid off without a key, as you can see in the above picture.  Now … I’ve replaced the lock and found a key for it and I could touch up that paintwork on the end of the bed, but although the repair to the woodwork’s a DIY job, frankly it needs better eyesight than I have.  And as Elsie says, there’s also the fact that some folk won’t be bothered about the damage, so all things considered, we’re selling it “as is”.

Anyhow.  Seeing as how Elsie was busy playing in the mud with her new raspberry canes this morning, I was persuaded to take a couple of cheques to the bank and pay them in, which is something I’ve been loathe to do ever since the counter staff decided to funk up their spiel and start greeting customers as if we’re even younger than they are and we’re all in America.

Gosh.  The place has long since ceased to be a proper bank branch, at least to my way of thinking.  I mean, I don’t still expect cheque books to have a couple of leaves of blotting paper in them for the convenience of those who still write their cheques with a fountain pen.  And I don’t still expect to be asked if I would mind accepting used notes if they happen to be short of new ones when I want to cash a cheque, as was once the norm.

But honestly, what am I supposed to say when the young woman behind the counter enquires whilst hitting our cheques with her stamp thingy “Got much planned for the rest of the day?” I do realise that “How about you mind your own business?” might perhaps seem a bit churlish and that maybe “Well, I was thinking of calling at the timber yard to get some prices, then I have a prescription to collect from the pharmacy, and then it’ll be time for lunch and it’s my turn to do the washing up.  I might go up to the allotment after I’ve done that, but a lot depends on what my wife fancies doing this afternoon” might be overkill, so I fall back on “No”, with a rising inflection intended to convey my surprise at the question.

And while I’m at it, why do they ask “Is there anything else I can help you with today?”  Why the “today”?  Why on earth do they say that?  I always want to ask but never do …

I did though ask in the supermarket yesterday what the difference was between “pre-order” and “order”, my question being prompted by the A-board outside inviting shoppers to “Pre-order your Christmas food now”.  The woman who sorts out the self-service checkouts when they go wrong confessed that she too was puzzled by that, so she asked her supervisor, who didn’t know either.  Before long, the question was exercising five employees, and in the end the best that one of them could do was suggest that “pre-order is what you do when you order stuff before you need it”, which I thought showed initiative if nothing else.

It’s been one of those days, though.  I just walked back the mile or so from the timber yard with a 4.2 metre (14ft, give or take) length of timber handrail on my shoulder, and I wouldn’t mind a crisp tenner for every strange look I got on the way.  Elsie says that they stare because people just don’t do things like that any more.  Normals don’t walk along the lane carrying timber.  Either they get it delivered or they poke it out of the tailgate or the roof of their car, which of course is fine by me.

But I can’t help feeling smug.  I got myself a bit of exercise in the sunshine, and on the walk home with my 4.2 metres of timber, I saw two robins and heard a third one, saw two wrens and a blackbird, and I heard a green woodpecker do that really loud laughing call that they do.  Whether he was laughing at me or at modern life, I have no idea …